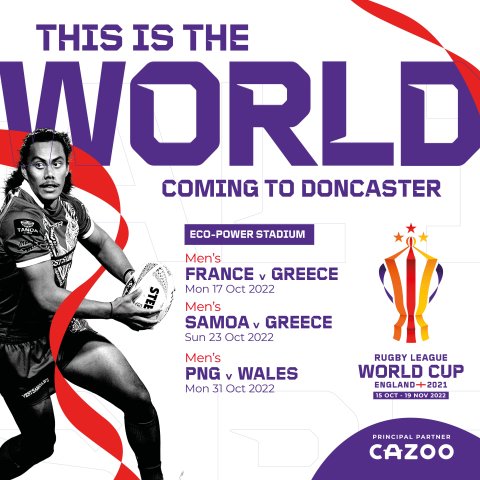 Fans of rugby league are being urged to ensure they get the best seats in the house for Rugby
League World Cup 2021 with just 100 days to go until the tournament kicks off at St James' Park as
England men take on Samoa men on 15 October.

The 100-day milestone sees excitement for the trailblazing World Cup continue to rise with this
Autumn's tournament breaking new ground in staging a record-breaking 61 matches across three
competitions simultaneously for the very first time. They will be held across 18 Host towns and cities – including Doncaster - meaning more matches in more places than ever before.

The tournament has also smashed the record for the number of tickets sold for an England-based
Women's Rugby League World Cup fixture with the opening match at Headingley between England
and tournament debutantes Brazil having already sold over 5,000 tickets.

In addition to a record-breaking sponsorship programme, hospitality sales have exceeded any
previous Rugby League World Cup while families can purchase tickets from just £2.21 for Under 16s
making it great value for all.

"The interest in the tournament and demand for tickets has been great to see, particularly after the
disappointment of postponement last year. We are now close to selling out a number of our
tournament fixtures, with the interest in women's and wheelchair matches particularly encouraging to
see.

"I urge everyone to get behind the tournament and be part of the sport's future history. It is vital we
see record attendances across the tournament, witness the best players in the world in action and be
part of something truly special."

RLWC2021 is set be a trailblazing tournament with the men's, women's and wheelchair competitions
being staged together for the first time with every second of every one of the 61 matches being
broadcast live across BBC platforms.

The tournament will be a truly global celebration of rugby league with teams flying in from all corners
of the globe to fight for the opportunity to get their hands on one of the three famous trophies, with the
women's competition hosting teams from four different continents for the first time in history.

"It's so exciting to be just 100 days away from the World Cup kicking off at St James' Park. The
interest in all three tournaments is incredibly encouraging to see, not only from fans of rugby league
but in the wider sporting world and media.

"In my opinion rugby league is the most exciting sport in the world and I'm looking forward to seeing it
showcased on the global stage in October and November."

"Rugby League World Cup 2021 has already had a real impact in communities up and down the
country before a ball has been kicked or a pass has been thrown and it will be amazing to see how
the excitement for the tournament continues to grow between now and the first match.

"In a packed sporting calendar I'm more confident than ever that the Rugby League World Cup will be
one of the highlights of the year and create fantastic memories for everyone involved."

England and St Helens star Jodie Cunningham, who is expected to take part in her third World Cup
said:

"Having been part of the England squad at the last two Rugby League World Cup's the prospect of
representing your country at the highest level of the sport never gets old. The prospect of doing it at a
home World Cup in front of a passionate home crowd is even more mouth-watering.

"RLWC2021 will be a real global celebration of women's sport, one I am hugely looking forward to and
one that I am incredibly proud to be a part of. With teams from four different continents competing for
the very first time it represents a fantastic opportunity to grow the women's game across the world
and encourage more young girls to get involved in rugby league."

Fans can purchase tickets via www.rlwc2021.com/tickets